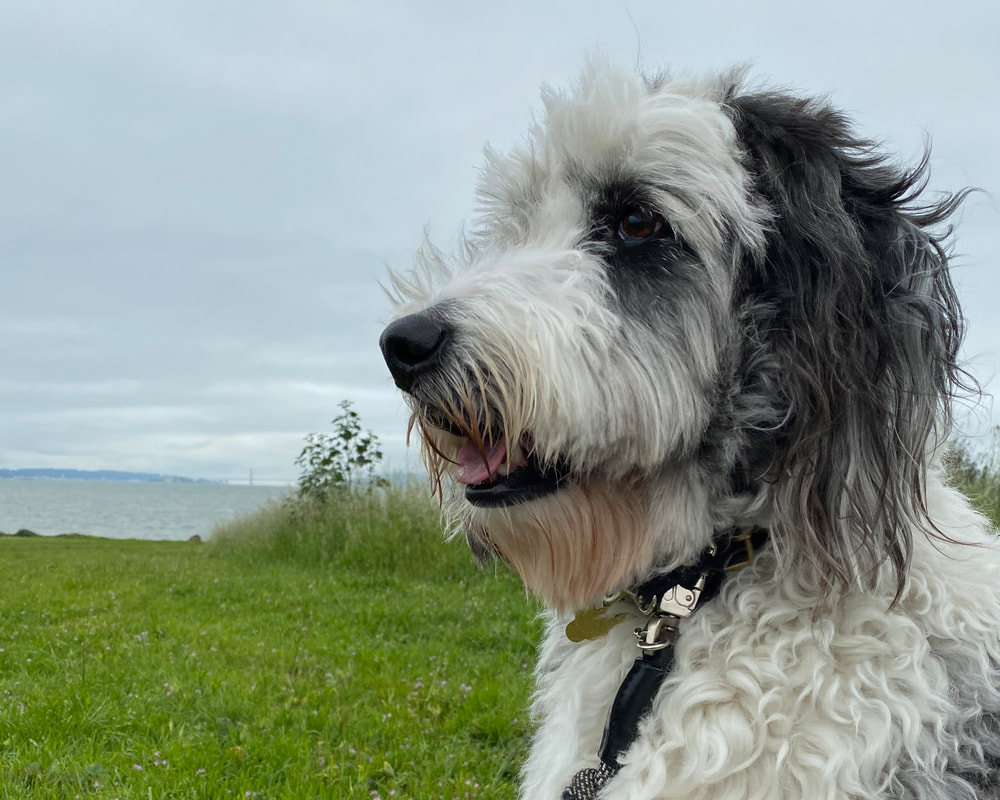 He's an 8-year-old, 65-lb. adorable Aussiedoodle boy. He's an F1 -- his Dad was a grey and white Standard Poodle, and his mama was a Merle Aussie Shepherd.

Barli is a road warrior! He loves car trips and loves to "go with." His person has a little seatbelt used with a harness because he does seem more comfortable being "held" in the car versus being free. Sometimes he's been known to jump around into the front seat and the seatbelt prevents him from any unintended incidents.

Barli was born 10-25-12 in Oregon, then spent some time in Salt Lake City where he loved trail-running and hiking. He's also spent time in Chicago, Nebraska, and Berkeley;  and moved to Denver with his person this past fall. Now he needs a forever home as his person's next job won't allow Barli to accompany her.

​Barli with kids:  Barli loves kids. His person has many friends with children, but there are no kids in his current household.

Barli with dogs:  It’s tough to meet some big dogs on a leash, and Barli seems to like being in a pack. He always does well with small dogs, other Doodles, and easy-going dogs. Other “leader-type” dogs usually are the ones that take a just bit more effort up front to make sure he knows he’s not in danger or needing to defend anyone/anything.

Barli’s watch-outs:  He bolted out the front door at a dog sitter’s in Nov 2017 (this was a major one, and he was a wild poodle for one week). Once he's out running free, the danger is that he thinks running is a game of chase and so he’ll lose interest in coming back inside. When he's trained with repetition, his recall capabilities are amazing, and he’s incredibly food-motivated in case this does ever happen (he’s sneaky and smart and so it very likely could).

What Barli wants:   A loving owner with the ability to tap into his natural discipline and focus -- someone who loves giving him lots of pets and scratches.

What his person wants for Barli:    A family. Love. A forever home. Plenty of sunshine, brain, and body exercise daily. Good food, lots of water. Haircuts, buddies, and adventure. For his family to take exceptional care of him. Barli just wants to be with his humans and any other buddies in his pack. This boy is so special, and the sweetest soul you ever might meet.

In Barli's own words:    "My cuddle game is strong -- especially in the mornings, and I’m always down for a belly rub! I probably understand what you’re saying 73% of the time, even when you’re asking me those complex questions (my buddy says it's because I'm so smart). I can be quite headstrong, but I love to learn and use my brain, and if something is really important to you, I’ll do what I can to make you happy."

​Summit Dog Rescue is saying:   "We will only adopt Barli to Boulder-area residents. Although he is mostly a Doodle, he does have some Aussie Shepherd in him, so he's not 100% hypoallergenic."

For more info and/or to apply to adopt Barli, go to the top toolbar, click Adopt, click Dog Application;  then fill it out and send it in. A volunteer from Summit Dog Rescue will get back to you as soon as they can.