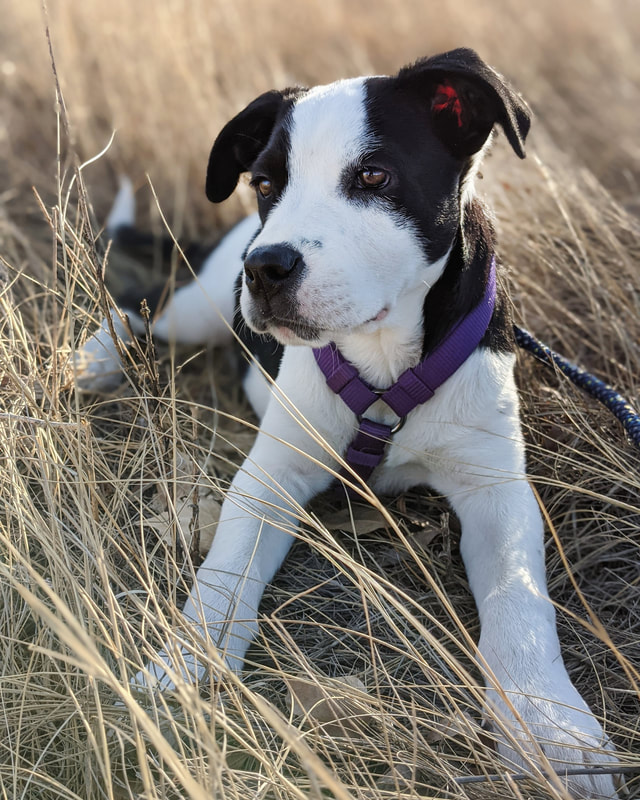 He's a 1-1/2-year-old Great Dane/Catahoula Leopard Dog mix. He's sweet, energetic and smart, and he does well training with treats.

Franklin LOVES other dogs and people. He hasn't been exposed to cats, so we're not sure about kitties. He's great off-leash and he listens well. He's constantly super-cute. One of the cutest things he does is he loves playing with big rocks. He'll pounce on them and push them around. Not only that, but he loves playing in rivers and lakes - a real water boy.

He also loves wrestling with people -- he's very gentle and tolerant, and he loves meeting new people. He isn't easily spooked and has a strong protector streak in him. He's a great family dog.

Franklin feels safe in his kennel and he's partially kennel-trained. He's super-trainable but his people haven't had time to teach him much. He can sit, stay, come, go after tennis balls and sometimes will fetch. He does great with stronger toys. He's so smart he can figure out all the dog puzzles really quickly, and he loves lick bowls. He rices strapped to bicycles well, and he loves to hike. He comes when called off-leash, no problem. He doesn't stray too far from home if accidentally left outside.

Franklin can be left at home for 6-8 hours with no problems or anxiety. He sleeps through the night without waking up to take him out (10 pm to 8 am), and he sleeps when you sleep. He likes cars and trips. He enjoys new places, people and dogs. He is happy to be treated with kibble.

Here's what his people say about him:  "We adopted him about a year ago hoping to find a calm Great Dane family type dog. He wants to be in the mix at all times. He is very family-oriented but also is way more energetic than we can handle. We have found that he needs about 2 hours a day devoted to exercise and sniffwalks. If he doesn't get two separate big excursions twice a day, he gets a little wild and we are not able to really provide this level of attention and time to him. We have two young kids who are also very demanding of attention from us and a tiny yard which does not allow him to run. We feel he would do great in a home where he has a lot of land to run around on or with a family that has time to exercise him twice a day and do lots of mental enrichment for him. He would also do well with a family with older kids, maybe teens. But he will occasionally chew stuff up if he does not get his running time in. He also needs mental enrichment, and the household does not have time for that."

For more info about this wonderful boy and/or to apply to adopt him, send an email of inquiry to SummitDogRescue@yahoo.com telling us a bit about yourself, your activity levels and your home environment. Franklin needs an active adopter or adopters with preferably a big yard or acreage -- adopters who can keep him engaged and exercised throughout the day. Thanks.