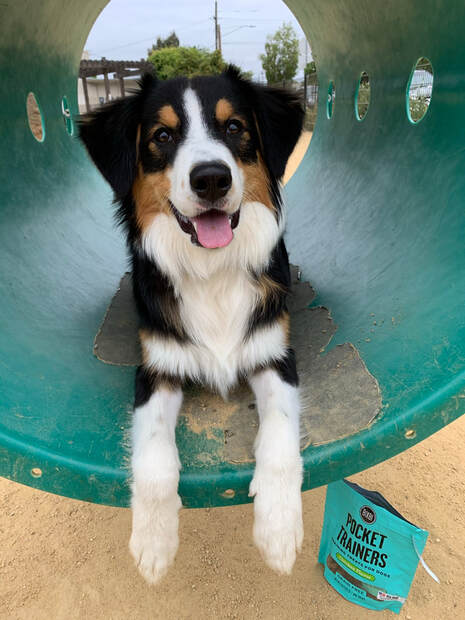 He’s done really well with dog sitters and with puppy training and socialization in large doggie play groups. However, he’s a young boy who’s sometimes a bit too energetic for the other dog in his home, and spats have occurred over food, toys and attention. So in Cooper’s best interests his people are looking for a better situation for him.

Cooper would thrive in an environment with no kids, cats or other dogs so that he could be the only dog — at least for another year or two as he matures. It was suggested that Cooper may do well with a dominant female dog at home (not a dominant male dog) but this is an unknown and would depend on the specific female dog.

Cooper’s ideal home would be with a single person or couple who can dedicate time and attention to training and nurturing him. He loves routine, structure and predictiveness, and is as loyal as can be.

He also loves getting tons of attention when people are around so he can express his love. He does have some separation anxiety when dropped off at the dog sitter, but he’s adaptable and settles down after a bit of time.

He does great tagging along for all of life’s adventures:  in the car, to the park, out to lunch. He loves to be involved.

Adopters will need to help Cooper work on his leash skills as he has a prey drive (squirrels, bunnies - understandable given his young age) — but he’s currently learning Sit, Stay and Touch.

Cooper’s people are in Centennial, CO and are willing to bring him to his new family.

He’s really smart, eager to learn and perform, and he loves his people in the way only an Aussie can.

For more info and/or to apply to adopt Cooper, send an email of inquiry to SummitDogRescue@yahoo.com, telling us a bit about yourself, your home environment and your lifestyle. A volunteer will get back to you as soon as they can.